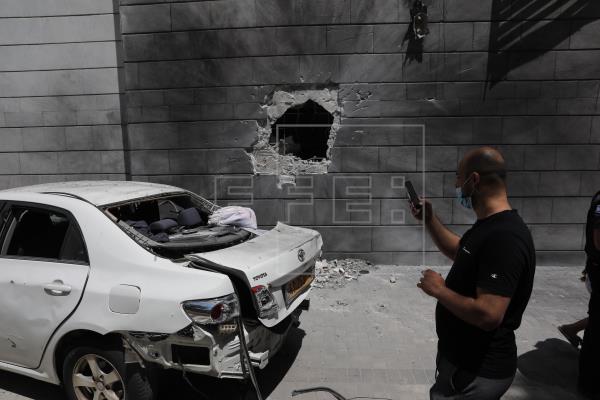 Israel intensified its bombardment last night with a curtain of fire on the Gaza Strip. More than 150 air operations in a few minutes and a curtain of artillery fire from the border itself appeared to precede the ground entry of troops and armored vehicles into Gaza.

An Israeli military spokesman initially claimed, in fact, that there were «ground troops attacking in Gaza», although he later clarified that these forces had not entered the strip, implying that it could be artillery fire from outside.

In any case, everything evoked last night a ground operation in Gaza as was already done in 2008 and 2014. Throughout the day, the deployment at the separation fence had been reinforced and the Army assured that it was studying «various scenarios for the ground operation». Around 9,000 reservists were mobilized «exceptionally», according to the Ministry of Defense, and the deployment at the border looked similar to that of seven years ago.

The Eid holiday has brought no ceasefire and violence is escalating. An Israeli military spokeswoman reported last night that three rockets from southern Lebanon were fired on Israeli soil – a fact which was confirmed by the Lebanese authorities – without causing any significant damage when they hit the waters of the Mediterranean. Last night no group had claimed responsibility for firing the projectiles.

According to the latest balance sheet of the Palestinian Ministry of Health, nearly 150 people have already been killed and more than 450 wounded following last night’s operations. The more than 1,000 rockets fired by Hamas in recent days have so far killed seven Israelis and are keeping the populations of the center and south of the country on constant alert.

U.S. diplomat Hady Amr, sent by the State Department, is working to try to mediate between the parties. His arrival was not well received by the ultra-conservative Jewish media, which accused him of being «anti-Israeli» and quoted an article he published in a Lebanese newspaper, his country of origin, a year after 9/11 in which he assured that during his youth he felt «inspired by the Intifada».

Efforts by Qatar and Egypt have so far failed to bring about a cease-fire, although Hamas has given the green light to stop hostilities «if Israel also stops operations». So far the Jewish state prefers to press on and «the army will continue to strike to ensure a full and lasting calm,» according to Defense Minister Benny Gantz. The United States is betting on talks with different actors in the region and once again ruled out a meeting of the UN Security Council to address the extreme violence of the last few days in Gaza.

The firing of rockets into the Tel Aviv area forced Israeli authorities to redirect planes to Eilat airport in the south, and several foreign companies decided to suspend flights to Israel until the situation calms down.

Upon learning of this change, Hamas claimed to have launched a rocket with a range of 250 kilometers towards this alternative airport in Eilat and called on «international airlines to immediately suspend all flights» to Israel. The closure of Ben Gurion International Airport is one of the objectives pursued by the Islamists in each of the offensives they wage against Israel.
All for Al Aqsa

In addition to massive bombardments, Israel is betting on selective attacks and the number one target is Mohamed Deif, leader of the military wing of Hamas. In the last 24 hours, the army added the name of Iyad Tayyeb, one of the commanders of the Islamist group, to the list of top commanders killed.

The Israeli ground offensive was met with a response from the spokesman for Hamas’ armed wing, Abu Obaida, who said that they have «surprises in store that they cannot imagine». Obaida took stock of the last few days and stressed that «hitting Tel Aviv, Jerusalem, Dimona, Ashdod or Beersheba is easier than drinking a sip of water». This is the first time that Hamas does not fight with the aim of easing the blockade that Gaza has been suffering for a decade and the Islamist spokesman made it clear to the media that «any price we pay is for the Al Aqsa Mosque and Jerusalem, and our existence has no meaning if we do not fight for them».

This same point is stressed by Gazan activist Ahmed Abu Artema, one of the organizers of the Marches of Return, which for months brought thousands of Gazan demonstrators to the separation fence, for whom the big difference between this offensive and previous ones is that «now all Palestinians» are united. The Gazans consulted agree that Israel’s bombardments are the most intense they have ever suffered. If the number of troops at the separation fence resembles that of 2014, the level of bombardment exceeds that of Operation Protective Shield, which left more than 2,000 dead, most of them civilians, according to the UN count.