Portada » Is there a risk of civil war in Israel? 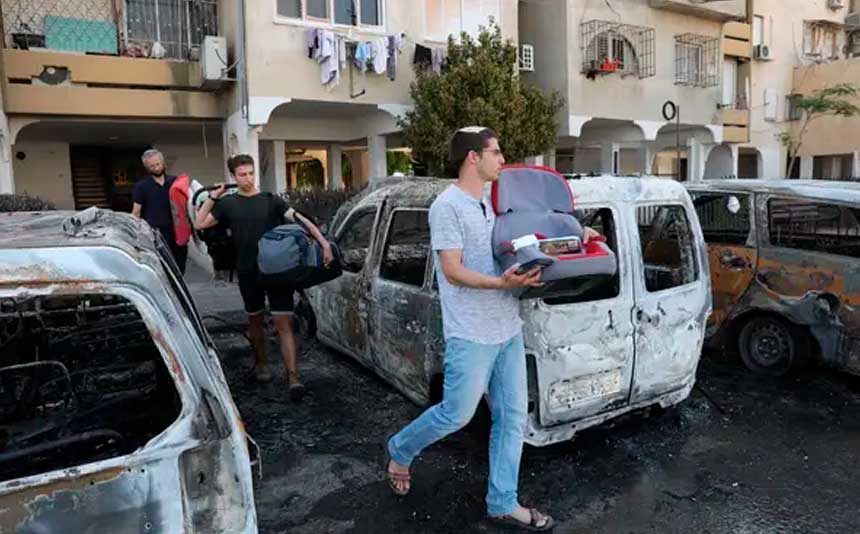 Is there a risk of civil war in Israel?

Clashes between Jews and Arabs increase in several cities

The upsurge in fighting has also been followed by an increase in clashes between Jews and Arabs in several Israeli and West Bank cities, including beatings and lynching attempts, raising alarms about the possibility of a full-scale civil conflict, Israeli media reported.

As the barrage of rockets fired from Gaza into Israel and subsequent retaliatory shelling made headlines on Monday night, a new flashpoint of tension began to emerge in Israel’s mixed cities. Hundreds of Israeli Arabs took to the streets to demand the same thing that the Gaza rockets were demanding: an end to the repression in occupied East Jerusalem and especially against the riots at the Al Aqsa Mosque. Protests have continued to grow, especially in Lod, where an Arab demonstrator was shot dead on Monday by a Jewish citizen who tried to prevent the mob from attacking vehicles and residences on his street. Since that incident, what was until now a relatively cordial coexistence has turned into a situation of identity violence between neighbors.

The Arab population attacked synagogues, Jewish vehicles and residences, while Muslim worshippers denounced the burning of their vehicles and attacks by Jewish religious groups, both in the streets and inside a mosque.

The mayor of the mixed city of Lod compared it to a civil war. Arab experts and activists say the violence was fueled by the unrest in Jerusalem that has brought Israel to the brink of another war in Gaza, but has its roots in deeper grievances dating back to the founding of the state. Israel’s own prime minister, Benjamin Netanyahu, called on Jews and Arabs to stop attacking each other: «I don’t care if your blood boils. You can’t take the law into your own hands,» he said.

The violence comes at a time when Israel’s Arab minority appeared to be gaining wider acceptance and influence. Mansour Abbas, the leader of an Arab party with Islamist roots, is poised to play a key role in a coalition that would topple Prime Minister Benjamin Netanyahu and his right-wing allies.

Arabs say the violence of the past two days was not directed against Jews, but against religious nationalists with close ties to the settlement movement who have moved into mixed areas in recent years, driving out Arab residents. Israel’s Arab minority represents about 20% of the population and are descendants of Palestinians who stayed in the country after the 1948 war surrounding the creation of Israel, when an estimated 700,000 fled or were expelled from their homes in cities such as Lod. They have citizenship, including the right to vote, but face widespread discrimination.

Arab citizens speak Hebrew and are well represented in Israel’s medical profession and universities, but they largely identify with the Palestinian cause, leading many Israelis to view them with suspicion. Lod’s Arabs, who make up about a third of the city’s population, are among the poorest communities in Israel.

Adding to the tensions are increasingly powerful far-right groups in Israel that won seats in the March elections and are allied with Netanyahu. In recent days, far-right politicians have visited the tense East Jerusalem neighborhood where families are threatened with eviction and organized marches elsewhere in the city.